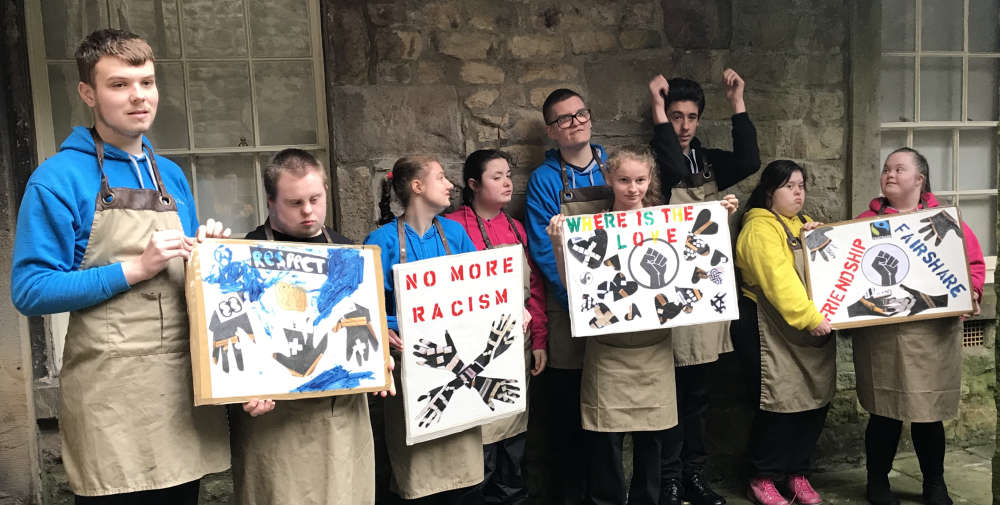 Local school pupils are learning about the city’s slave trade past at workshop sessions in school and the Judges Lodgings museum as part of the Facing the Past project.

Facing The Past is a new project funded by Arts Council England, which aims to reflect, reveal and redress omissions in the way the city of Lancaster has so far commemorated its role in the transatlantic slave trade.

The Judges Lodgings, a partner in the project alongside Lancaster Priory, Lancaster Black History and arts, heritage and community organisations including More Music, has hosted school visits.

As well as being home to displays of Gillow furniture, the Judges Lodgings acknowledged Lancaster’s slave trade connections when it commissioned Turner Prize winning artist Lubaina Himid’s Swallow Hard in 2007, marking the bicentenary of its abolition.

At Loyne Specialist School she delivered a sensory story based on the transatlantic slave trade using fictional characters.

“By the end of the session students were able to name the goods imported from the West Indies as well as key places involved in the triangular slave trade,” said Geraldine.

“They shared their feelings about the mistreatment of people just because they had black skin and understood that it was wrong. They understood that although the slave trade is not legal today, racism still happens.”

Artist Sue Flowers taught Loyne pupils about her commission for the 2007 Abolished? project and how art can tell stories, make a difference to people’s understanding and reveal aspects of hidden history.

During Sue’s workshops at the Judges Lodgings, pupils explored the role of sugar and coffee as traded products brought back to Lancaster and produced CD covers for their chosen music by black artists. They also made protest placards to explain how they felt about the treatment of the slaves and what this history means to them today.

The Cathedral pupils participated in an art workshop too led by artist Nayna Lad, who’s taught art and design in Africa and the UK.

“The modern education system doesn’t give many opportunities for students to be creative and use local history so we hope that this project will inspire educators to teach beyond the classroom and use the history on our doorstep,”  said Geraldine.

She is currently compiling a primary schools pack containing online resources as well as activities and teacher notes to support learning of the slave trade.

*Free Facing The Past community workshops are also running alongside the school sessions. The next takes place on November 6 at More Music in Morecambe led by renowned public artist, Venessa Scott followed by Nayna Lad’s workshop at Lancaster Priory on November 13.