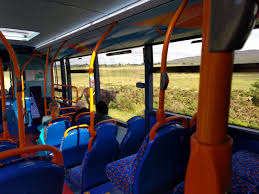 Service 80/81 links Lancaster, Hornby and Kirkby Lonsdale and Ingleton via villages in the Lune Valley from Monday to Saturday, and is operated commercially by Stagecoach. Stagecoach had notified the councils of its intention to withdraw the service from 1 January 2022 as it is not commercially viable. However, both councils have agreed to step in to support it until the end of March 2022 as the bus is the only public transport serving a number of villages, and used by significant numbers of students to get to school. The councils' decision will allow officers time to explore and assess the options for providing public transport throughout the Lune Valley, including whether existing supported services could be extended to cover the route served by the current 80/81 service. The existing Sunday and Bank Holiday services numbered 81A and 81B, which operate a different route covering the whole Lune Valley, and are already fully funded by Lancashire County Council, will continue to operate as normal and are not affected by this decision. County Councillor Charlie Edwards, Lancashire County Council cabinet member for highways and transport, said: "The 80/81 Service is virtually the only public transport available throughout much of the Lune Valley, and used by many people to access education, get to work, and reach family and friends and other vital services. "All bus services have lost passengers due to the Covid pandemic, however even according to current figures the service makes 125,000 passenger journeys every year, and losing it would have a significant impact on everyone who currently relies upon it. "We have therefore decided to support Stagecoach to continue to operate the service from 1 January until the end of March while we work with North Yorkshire County Council to look at the options for providing public transport across this area from April 2022 onwards." Most of the route served by the 80/81 Service is within Lancashire. Lancashire County Council has agreed to support the service for 3 months with the help of North Yorkshire County Council to support the section of the route within North Yorkshire. Services 80/81 currently provides many links between Lancaster and Kirkby Lonsdale/Ingleton across a wide area of the Lune Valley, serving the villages of Caton, Brookhouse, Hornby, Wray, Wennington, Melling, Tunstall and Burrow, as well as the North Yorkshire villages of High and Low Bentham and Burton-in-Lonsdale. The services currently operate generally every hour during Monday to Saturday daytime, between Lancaster and Hornby extending alternate two hours to Kirkby Lonsdale or Ingleton. There is an extra journey morning and afternoon on schooldays, numbered 81G which is used by students attending Kirkby Lonsdale Queen Elizabeth High School.