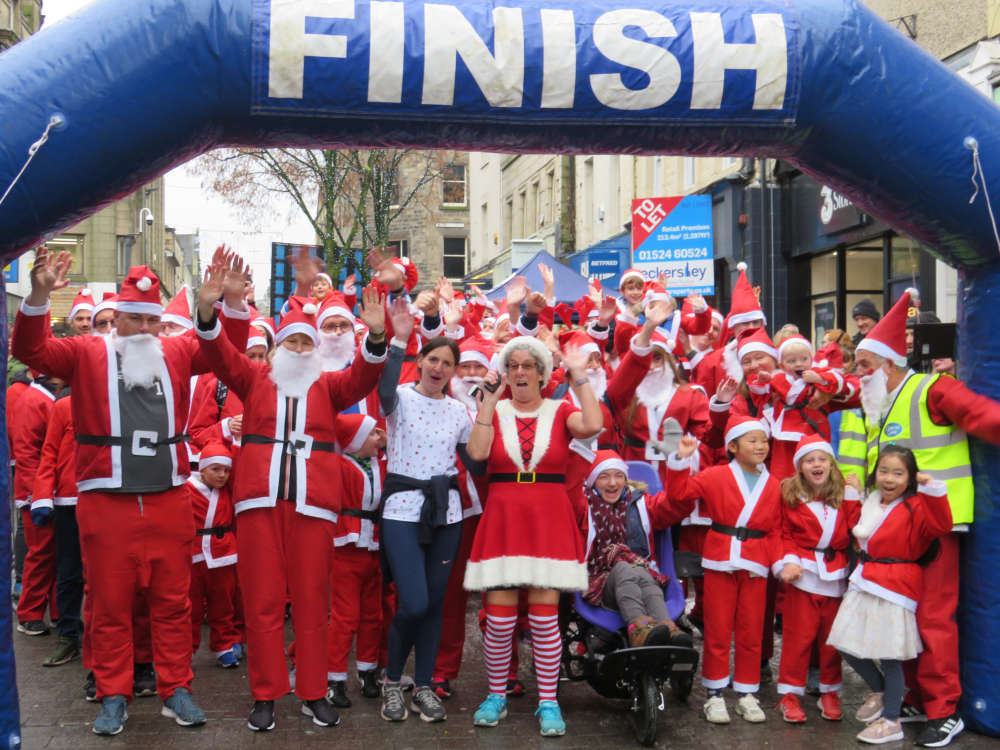 CancerCare’s annual Santa Dash will be back with a bang this Christmas with the event going ‘on tour’ to Lancaster, Morecambe, Kendal and Millom.

The Santa Dash is one of the charity’s flagship events which usually sees hundreds of people dressed as Father Christmas enjoy a fun run around Lancaster city centre as part of the Christmas light switch-on festivities.

Last year, the event moved online due to the coronavirus pandemic but the easing of restrictions means the charity can one again run mass participation events to help bring in the money it needs to provide counselling and therapy for local people affected by cancer and bereavement.

This year’s Santa Dash will take place on the following dates:

Organiser Kat Michaels said that as soon as it was confirmed the charity could organise face-to-face physical events once again, she was determined to make the Santa Dash bigger and better than ever.

Kat said: “The Santa Dash is one of our favourite events because, as well as raising thousands of pounds, the sight of so many people running around, having fun dressed as Father Xmas does a fantastic job raising awareness about the work we do.

“This year we will be doing it across all of the areas we serve and it will be wonderful to see everyone out with their families having fun.  I am particularly excited about the runs in Morecambe and Millom as they are completely new areas for us.”

The Lancaster Santa Dash will feature a family run around the city centre beginning and ending at Cheapside and also longer 5k and 10k routes to provide a competitive element for more serious runners. The participant who raises the most money in sponsorship will be given the chance to pull the switch on the Lancaster BID Christmas lights later that day.

Taking part this year will be Gareth Blackburn, Andrea Brink Siem and Tomasz Goney all of whom competed in the last event in 2019 – with Tomasz winning the men’s 5K race.

Andrea said: "I did the Santa Dash two years ago and it was just amazing to do an event that brings loads of different people together unified by the same goal; to raise money for an important cause. It is such a fun challenge and everyone really supports each other. The happy atmosphere of so many Santa's in one place needs to be experienced in person!”

Last year’s Virtual Santa Dash raised more than £14,000 for the charity and this year it is hoping to do even better.

Chief Executive Alison Stainthorpe said: “It has been a tough year for everyone and we are experiencing a huge surge in demand for our services.  The pandemic has curtailed our fundraising activities over the last year but I’m overjoyed to see our Santa Dash not only return but expand across the Morecambe Bay area.

“It costs us around £142,000 a month to operate our centres and we rely on public donations for the vast majority of the money we need to keep going. The community has always really got behind Santa Dash, and I’m sure they will again this year.”

To find out more visit cancercare.org.uk/news-and-events/santa-dash-on-tour-2021