I’ve had a busy few days at the station and as part of the local music scene this weekend. From the School Aid fundraiser day to the Sunday afternoon interview session, I think Beyond Radio business has kept me occupied in all of my favourite ways.

I hope some of our readers and listeners made it to The Bobbin in Lancaster and/or to The Exchange in Morecambe. The weekend was a great show of local generosity and musical talent. I was there briefly on the Saturday, but hope to be included as part of the team and take on a larger role next year.

I know that’s something that my friend and co-volunteer Gibson Freedman is keen for me to do, because he set me off on a road to live event presentation this weekend – showing me the list and times of performances he asked me which I’d like to introduce. Oh, Gibson, you’ve started something now!

Introducing a band to the stage is something I’ve never done before. But Gibby, our very own Gibson Freedman of the Teatime show, asked me to join in and have a go at presenting a band or two. He has so many years of radio and music related experience I was delighted (felt quite honoured) when he smiled, handed me a microphone, and said, ‘Go on, you’ll be alright’.

Two bands that I have been really looking forward to seeing were listed on the bill at School Aid. I was only able to attend on the Saturday, so luck was on my side, as both were on the bill that day at The Bobbin in Lancaster.

LEFT were on stage first and Gibby encouraged me to try introducing them. It felt like a speedy moment in time, quite a blur, and gone in a flash. I have a vague memory of saying something like, ‘if you’re ready for some punk noisy, this is LEFT’.

This band blew me away. It felt as though they were determined to flex and fill up the space around them with their sound and performance. The frontman put on an incredible show: throwing his microphone and strutting around the floor space in front of the stage. His shouting and growling of lyrics and spoken word, his grabbing the attention of unsuspecting audience members with his wanderings around the bar area, and the unexpected chair-top performance, were an exciting mix of terrifying shouts and softer moments of stillness. Superb entertainment. And if you like that sort of thing, it was very punk.

Kiwi are a wonderful new band from Morecambe. Lyrically very catchy and relatable, musically rocky yet melodic and tuneful. Indie pop-rock is how I described them as I introduced them to the stage as the headline act. I spoke to the singer, Tom Taylor, just before they went on stage and he told me that there are two more singles almost ready for release. If they are half as good as their debut, Codeine, they will be hits. That did seem to be their most popular and well-known song on this occasion. The audience crowded to the front of the stage and sang along with the band.

‘Don’t waste the night, call me up and you might, just save me in time.’

Kiwi certainly did make the most of the night and their live performance was very good, very entertaining, and one that I’m sure secured their name as ‘ones to watch’ in the local scene (and probably beyond).

The Radio and The World

Introducing a band on the stage at a live event – it’s not like presenting a radio show at all. I remember how nervous I was recording my very first show. Alone in the studio I pre-recorded my voice links and added music to my playlist on the Myriad software system. I tried not to think about who would be listening, as I am actually quite a shy person at heart. I have overcome my nerves over the years using different techniques, but nothing really prepares you for your first radio show.

When I’m in the studio I pretend that no one is listening. Of course, that’s far from true and there are thousands of people who voted for my monthly new music show. Apparently, we now have a geographic coverage of around 380,000 adults on DAB. The added possibilities of listeners online and with the mobile phone apps is absolutely mind blowing. To be voted in the Top 5 Favourite Shows in the 2021 Listener Awards was really quite something, and humbling. In a busy world of people and technology vying for everyone’s attention, people all over the world tune in to Beyond Radio. To my listeners and featured artist/bands in the UK, South Africa, USA, Germany, Ireland and wherever else (you know who you are), thank you so much for your support.

I’m back in the studio now. After my brief segue into the presenting at School Aid I have returned to the audio desk with all its colourful and shiny knobs, buttons and sliders. I still don’t know what most of them do, but I’m learning. I can produce a radio show though, so I’ve made great progress in the right direction.

My monthly spoken word show, Spotlight, is going to be merged with the new music show from March 2022. Apart from a few important diary commitments, which will still be broadcasts as a Spotlight Special hour, the new interviews will be 10min, 20min or even short snippets of chat, mingled or slotted into the weekly The New Music Brief show, in its regular Thursday evening slot at 8pm.

I have recorded an interview with the Lancastrian band LOWES which will be broadcast on Thursday 24th February at 8pm. How wonderful to have Evie, Jamie and Luke in the studio. Although I am a fan of their music and of the band in general terms (check out their new website), I am especially in awe of Evie’s creativity, which seems to be bubbling to the surface at any given moment. 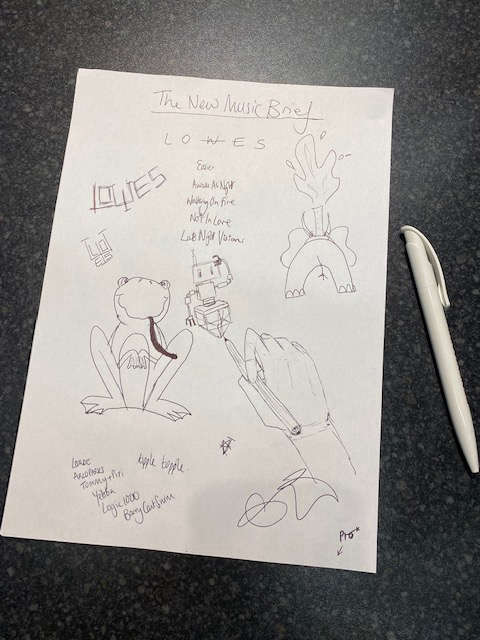 When chatting and recording for the show, I asked Evie about her current listening choices. Whilst talking to me about genre mix, favoured artists, general influences, she was simultaneously scrolling through her Spotify account pages, adding to a list of recently played tracks and artists, and doodling. I do love to see creative personalities at work.

LOWES are on tour and have plans for an EP release this year, so catch them in Manchester in Mach or on their other tour dates, and watch for new releases – how lovely that they will be playing a hometown gig at Lancaster’s own Highest Point Festival.

Darren Mills, a local entrepreneur and the record label owner, has been a visitor to my show in the past. It was such fun to have him, James Lippmann the label manager, and George Lawson a Lancastrian artist, in the studio on Sunday afternoon.

As well as being privy to trade insights we were also treated to a glimpse of the lighter side of life in the FEAR family. How lovely to hear of the ways in which they collaborate and work as a team to develop young artists and emerging talent. Well known to many are the local rock band Gloria, and also the young Manchester band Shade. With another ‘on the way’ the FEAR roster is growing, and Lois is due any time soon.

The FEAR interview will be broadcast on Thursday 17th February 2022 at 8pm, and it’s a must listen for any new artist who wants to know more about the possibilities of life with a record label. Tune in to hear the serious and not so serious chat – for other aspects and some lighter hearted fun, check out their Instagram accounts.

And so the alarm rang out on Monday morning and I headed back to my other life and paid employment. I do have a good work-life balance but would like to do more of everything music related – there just aren’t enough hours in the week (or enough cash in the bank) for me to make any drastic changes at present. But who knows, this side hustle, my personal passion project, might just lead to opportunities in the future – wish me luck!