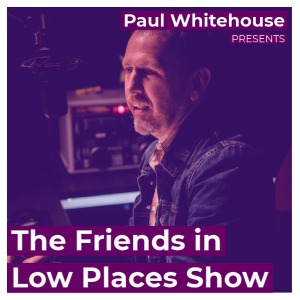 The 'friends in low places country show' is about more than just country music.

Tune in and expect to hear great country artists from the US, Canada and the UK, as well as Americana, Bluegrass, Alt-Country, Country Rock, and Country-Pop.

Presented by Paul Whitehouse, you will enjoy music from the birth of country in the 1920's, through all of its different ages, right up to the present day. There's also a weekly 'Country Trivia Teaser' to test your country music knowledge, and 'This Day In Country Music History' looking at events from years gone by.

Paul first got into country music listening to albums in his dad's music collection back in the 1980's. Those albums included 'The Baron' by Johnny Cash and '20 Golden Greats' by Glen Campbell.

Paul became a fully fledged 'country boy' however, when he discovered the 'new country' artists of the 1990's, artists like Alan Jackson, Garth Brooks, and Brooks & Dunn. From there Paul grew to love all the different strands of country music, new-country, outlaw country, traditional country, country-pop, country rock, and even 'hick-hop' (yes, that's a thing!).

Paul says "so if you're a country fan looking to get your weekly fix of 'three chords and the truth', or maybe just looking to try something new, then join me each Sunday on beyond radio for the 'friends in low places country show'."