The Deep Down Show 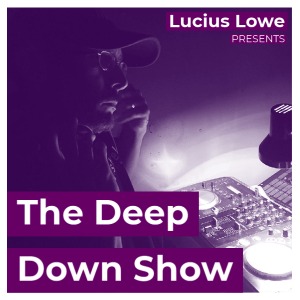 Each and every Saturday, join Lucius Lowe for the Deep Down Radio Show - a soundtrack to your weekend.

The Deep Down radio show airs from 10pm, hosted by internationally acclaimed DJ and producer Lucius Lowe, warming the evening up with a melodic and uplifting blend of soulful, funky and disco house laden with feelgood factor, guaranteed to get your feet twitching and your head nodding!

In the show, we revisit some classic house tracks with our time-hopping feature Vid's Vibe, each week Lucius picks an artist and plays three tracks back to back in his Artist Spotlight.

At 11pm we hand over to our guest DJ of the night, chosen from a wealth of talent from around the globe!

When asked how Lucius became involved at Beyond Radio, he said "I originally joined the Deep Down show purely by accident – I offered the new host some tips on mic placement and voiceover delivery. He asked me to begin producing the show with him, however, his work commitments increased and I took the reins as full-time presenter.

"Determined to make my mark on the show I rustled up some new jingles, added one or two new features and never looked back! Purely house music orientated, I aim to bring new releases and upfront promos in the first part of my show, keeping my finger on the pulse of what's currently heating up the clubs and dancefloors. One of the show's original features, Vid's Vibe winds the audio clock back and revisits classic house tracks from the 80's through to the 00's, hopefully re-introducing these musical gems to a newer, wider audience.

"A new feature I introduced, my "Artist Spotlight" showcases three select tracks from one artist picked at random each week, again with a view to bringing these artists to a new listener base. As well as current, established artists and classic acts, where possible I try to highlight up and coming producers and emerging local talent.

"I strongly believe radio is a perfect medium to give these artists a platform from which to shine, I'm proud to say more than one musician has had a track signed directly due to having been played on our show! At 11pm I hand the reins over to our guest DJ of the night, again selected each week to bring maximum enjoyment to the ears of my listeners. Occasionally I'll have a mix from a big-name guest but prefer to highlight mix sets from local DJs, a lot of my guests are known in and around the northwest clubbing community which helps to engage listeners on a more personal level, with the aim of connecting with my audience beyond the reach of the airwaves.”