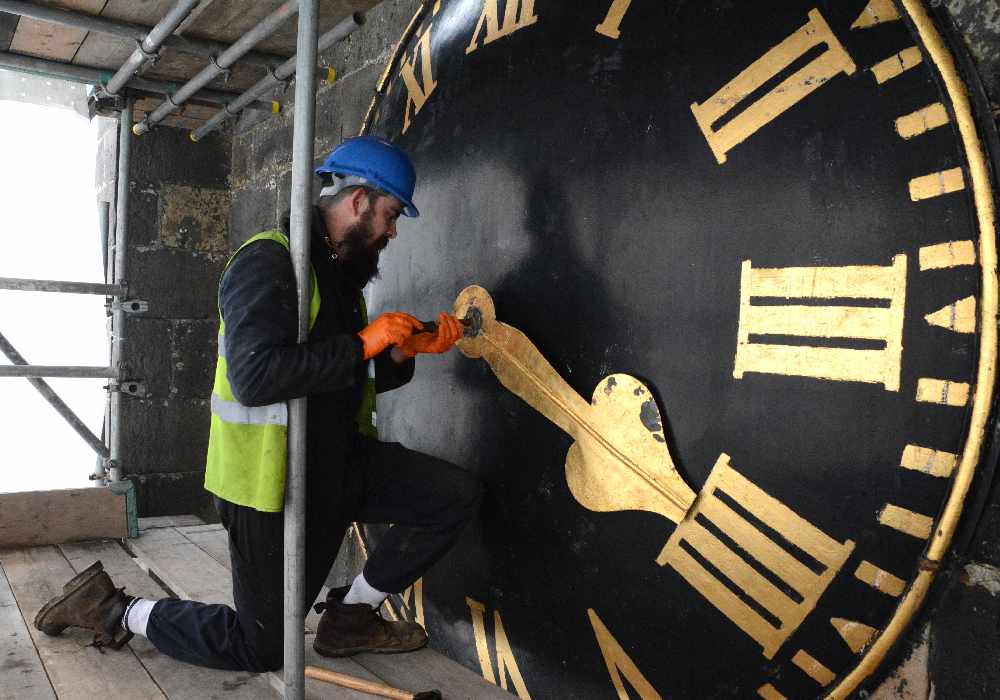 Horological engineer, Daniel Todd removes one of the clock's hands of time at Lancaster Priory.

Lancaster Priory’s historic clock which has marked time for locals and visitors alike since 1886 is being restored to its former glory.

Probably for the first time in its life the entire mechanism, which has been threatened by chronic water leaks, has been dismantled and will be cleaned and restored as part of almost £300,000 worth of repairs to the clock tower.

The work has only been made possible thanks to a grant from the Government’s £1.57 billion Culture Recovery Fund to help heritage organisations through the coronavirus pandemic.

The vital repairs are being carried out by Cumbria Clock Company which has previously worked on the country’s oldest clock in Salisbury Cathedral, the nation’s largest clock dials on Liverpool’s Royal Liver Building, and even Big Ben.

Keith Scobie-Youngs, Cumbria Clock Company director, said: “Lancaster Priory is lucky to have such a wonderful clock mechanism. Once our work is completed, this impressive machine will be a perfect servant to Lancaster for the next 140 years.”

The Vicar of Lancaster, Canon Chris Newlands, has described the clock as part of the warp and weft of the city.

It is said to be the best example in the UK of the workmanship of Lund and Blockley of London who were retailers of fine quality watches and manufacturers of house and turret clocks. Among their customers was Queen Victoria.

It’s thought that the Priory’s is one of only three turret clocks of its kind left in the world, the others being in South Africa and Australia. Until 1983, when an electric drive was fitted, the clock was wound up manually.

The Priory clock is special in many other ways. Its chimes are unique and possibly composed by the choirmaster at the time.

Also, in the clock room, is a change ring machine dating from around 1950, the only example of its type presently known to exist. It was probably used when bell ringers weren’t available for church services or ceremonies.

When the clock’s mechanism was being dismantled, it was laid out in the church for a couple of days for visitors to see. It will be cleaned and restored at workshops near Penrith over the next two months and in January, workers will abseil down the tower to remove the remaining hands.  Everything will be back in position by March.

The reverse of one of the clock’s hands already recovered revealed a hidden inscription written in 1991, during a previous repair, to mark the release of Anglican Church envoy, Terry Waite after more than four years in captivity in Beirut.

Canon Newlands has sent news of this secret part of the Priory’s history to the Archbishop of Canterbury in the hope that he will share it with Terry.

A film about the clock’s restoration is now available on Lancaster Priory’s Facebook page: @lancasterpriorymusic