Historic items returned to Carnforth council after half a century 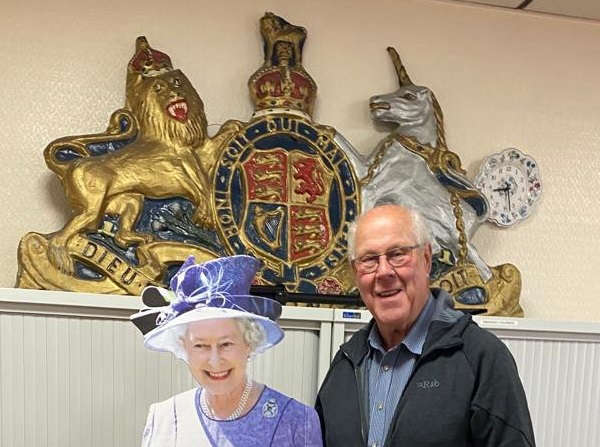 Photo:  Councillor Rowland Parker and the beautiful heladic crest that has been retrieved

Four historic items that relate to the days when Carnforth was administered by its own Urban District Council have been returned to the town after almost 50 years.

The artefacts, which include a magnificent royal coat of arms made from wood and papier mache, were rescued from destruction in 1974 by Peter Docton, then a young local dentist, who was moving into premises recently vacated by Carnforth UDC in Market Street, Carnforth.

In 1974, Carnforth UDC was disbanded as part of the reorganisation of local government in England and Wales. All Urban and Rural District Councils were abolished and most of their powers and responsibilities were taken on by new district councils. In the case of Carnforth, the new authority was Lancaster City Council.

Mr Docton, who is now retired and lives in Gressingham, recalled how he went to inspect the old council offices prior to moving his practice in and found a quantity of papers and office furniture that had been abandoned. He asked his new landlords, Lancaster City Council, to arrange for the material to be removed not realising that more substantial items were stored in upstairs rooms.

The Council workmen duly arrived, removed the contents of the various rooms and reported to Mr Docton that most of the items had been taken straight to the old landfill tip near Warton.

Curious as to what had gone to the tip, Mr Docton hurried there to find the royal crest that had previously hung in the UDC Council Chamber and several other items including a framed photograph of a former chairman of the UDC, an official certificate dated 1942 showing that Carnforth had raised sufficient funds to pay for two tanks, presumably ready for the coming battle of El Alamein and another framed certificate, dated 1951, from the National Playing Fields Association’s president, the Duke of Edinburgh, revealing that Carnforth had raised more money for the Association per head of population than any other town in Lancashire.

Mr Docton retrieved the items and took them home thinking he would look for a suitable home for them in due course. Now, after almost 50 years, Mr Docton’s wife, who had grown tired of the items sitting in a corner of their sitting room, suggested that perhaps now was an appropriate time to find that alternative suitable home.

Following an exchange of telephone calls with Carnforth Town Council, the items were collected and are now back in Carnforth where they can be seen at the Civic Hall.