The Shrimps are staying up: 9 KEY MOMENTS 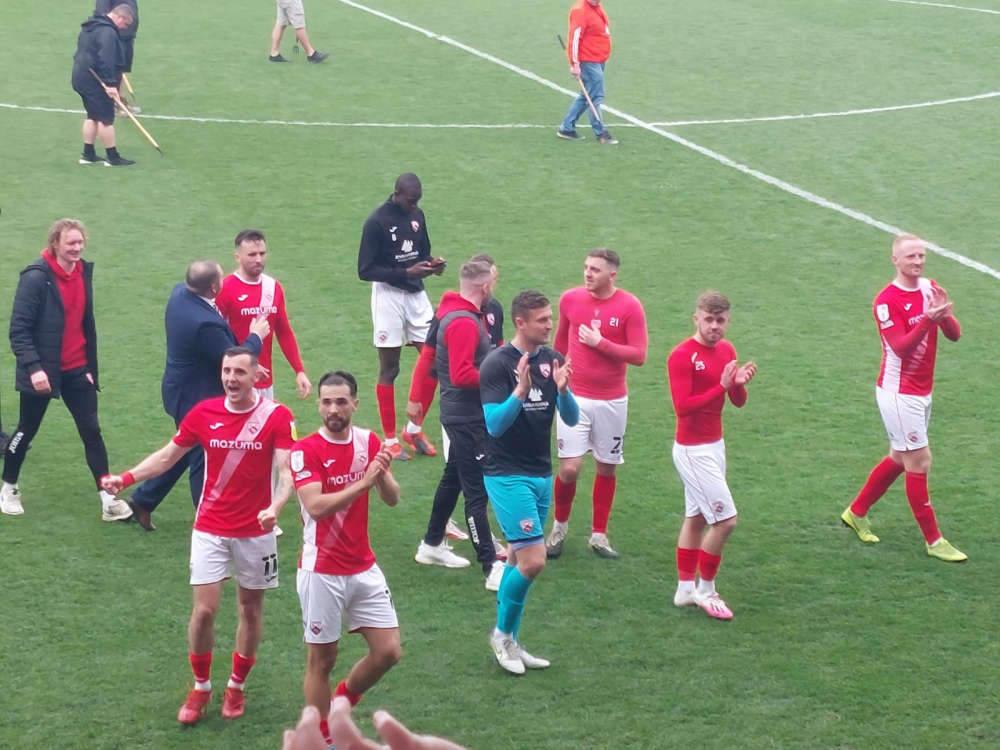 The Shrimps have defied all the odds to secure a second season in League One following an afternoon of drama during the final day of the season at the Mazuma Stadium.

Related: The Shrimpossible Dream - Morecambe survive after final day drama in League One

Shrimps Live host and commentator, Dave Salmon, looks back at 9 key moments of the 2021/22 season, that contributed to Morecambe FC remaining in League One:

The opening day of the season v Ipswich

Way back in August, we came away from Portman Road with an honourable draw against Ipswich, and felt disappointed, having led twice in the game. We had no idea just how significant that point would prove to be in the final reckoning. It also showed on our day, we would be capable of mixing it with the very best in the division.

Cole Stockton scores from his own half v Fleetwood

The reaction when the ball hit the net is something that will live with me for the rest of my life. But it’s not just the goal, which remarkably, didn’t even win the EFL’s Goal of the Month award. It’s the context. 94th minute, a winner in a local derby, and with Fleetwood ultimately embroiled in the relegation dogfight, those extra points made a significant difference to Morecambe’s survival prospects.

Morecambe’s New Year fixture saw fellow strugglers Doncaster Rovers visit the Mazuma. After the Shrimps had lost to relegation threatened Crewe Alezandra a few days previously, this was a crucial game in the battle to beat the drop, a genuine ‘six pointer’.

The Shrimps somehow conspired to find themselves 3-0 down at half time, before an incredible second half comeback saw them win 4-3. Come the end of the season, these extra three points, coupled with three points that Doncaster didn’t pick up as a result, have proved vital.

The name ‘Stephen Robinson’ is spoke about with little affection since his departure from the managerial hotseat, and for many fans, for what they consider to be good reason. After all, the timing of his departure was as bad as it could be. What cannot be forgotten though, is the shrewd acquisitions made in the January transfer window.

Trevor Carson, Rhys Bennett, Jacob Bedeau, Ousmane Fane and Dylan Connolly have all played a significant role in turning the Shrimps’ fortunes around. Kudos must go to Robinson and ex Head of Recruitment, Martin Foyle, as well as the board for backing the much needed signings.

Would we have been more comfortable if we’d have acquired this calibre of player in the summer? Possibly, but again, we’ll never know. What we do know, is that the window proved highly significant.

Late in the season, another big clash at the Mazuma saw Gillingham in town in another key battle in the League One relegation zone. Goalless into the second half, the visitors took the lead, before Jon Obika came off the bench to score a late equaliser to not only snatch a point, but also prevent relegation rivals from gaining any ground on the Shrimps. Another crucial point.

The return of Derek Adams

Derek Adams had only left the club nine months earlier to pursue an opportunity at League Two side Bradford City. But having left Valley Parade just a few weeks earlier, it seemed the stars had perfectly aligned for him to be welcomed back to the Mazuma with open arms.

It can’t be forgotten that Derek had a rocky start to his second tenure, and after a 5-0 hammering away at Shrewsbury Town, followed by another heavy defeat at champions Wigan Athletic, even the most optimistic of Morecambe fan was beginning to feel that the game might be up.

But from somewhere, and that somewhere is a place that only Derek and his heroes know about, Morecambe regrouped, regalvanised, putting together a run of results that yielded 10 points in 5 games to finally, and almost beyond belief, move above the dreaded dotted line, where they stayed until the end of the season, just.

In April, play-off chasing Oxford United visited the Mazuma. The Shrimps delivered one of their best displays of the season, and were deservedly leading 2-1, when in the last minute of the game, goalkeeper Trevor Carson pulled off the save of his life, somehow tipping a goalbound effort over the bar.

It was undoubtedly the best save I’ve ever had the pleasure of seeing in a live game, and preserved a crucial three points for Derek Adams’ men. On such moments, seasons can turn.

The Shrimps hosted Pompey on Easter Monday, on the back of a fine away win at Charlton Athletic. Trailing 1-0 deep in stoppage time, step forward Jonah Ayunga to smash home an equaliser to earn a vital point to the tally. Was it a foul on their goalkeeper in the build-up? Perhaps, but the Shrimps will certainly take it, given how little fortune they appeared to have at the hands of match officials all season.

More than 2,500 season tickets sold, and a season average home attendance of well in excess of 4,000, made a huge difference. 29 of Morecambe’s 42 points in total we’re earned at the Mazuma, down in no small measure to the home faithful spurring the lads on.

Did we mention, Morecambe Football Club has never been relegated in its 102-year history?