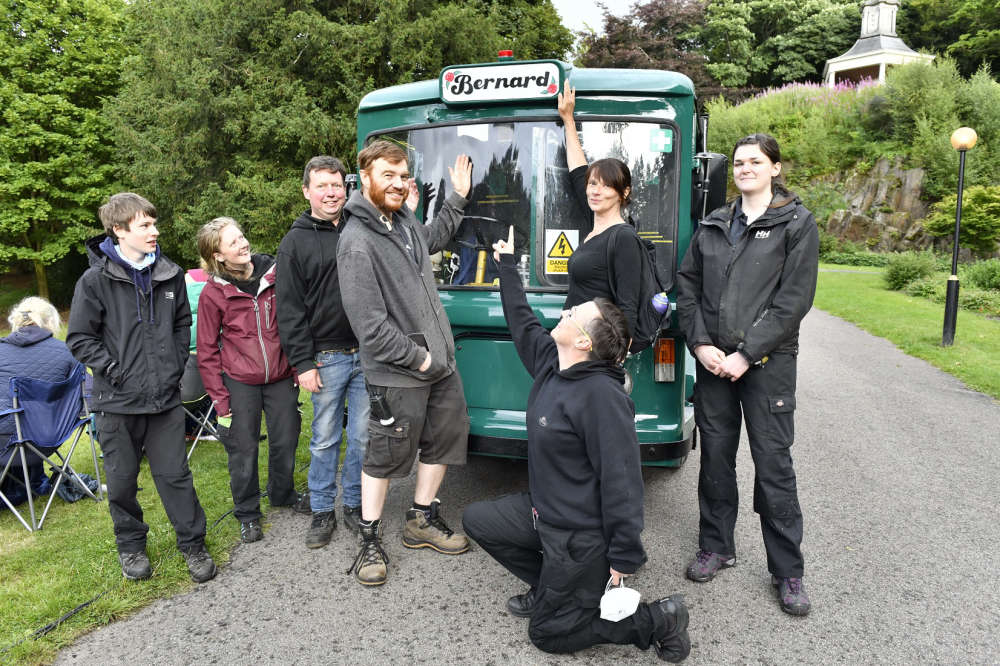 Lancaster's Dukes theatre has paid an unusual tribute to a much-loved volunteer and supporter of their outdoor walkabout shows.

Bernard Gladstone, who died in March, had seen every Dukes production in Williamson Park since 1987 and had volunteered at them for decades. He was also the theatre's honorary archivist for more than 40 years.

In honour of his support, The Dukes has named the milk float after him which travels around the park during shows. It carries the essential lighting and sound control panel, so Bernard's presence will be felt there for many summers to come.

After months of work, the newly restored milk float with its special name was unveiled by Bernard's daughter, Karen Chandisingh, who is The Dukes box office manager.

"My dad's two passions were The Dukes and his garden so when the theatre decided to present shows outdoors in Williamson Park, it was a dream come true," said Karen.

"As The Dukes archivist, it was important to dad to retain its history so he would be made up by this tribute. His family are immensely proud of him and it's so nice that his memory lives on in this way."

Bernard looked after the cast and crew in the Williamson Park dressing rooms during The Dukes summer promenade season for 25 years and in 2011, won a Making A Difference Award at Lancashire & Blackpool Tourism Awards for his dedication.

He even had an awardwinning garden packed full of props and memorabilia from Dukes park shows which was filmed by BBC NW Tonight in 2017.

The float, which began life delivering milk for the Express Dairy in Farnworth 54 years ago, was restored following a fundraising effort to pay for its long overdue repairs and the replacement of worn and outdated park show lighting and sound equipment.

The fundraising was supported by many generous individuals, the Foyle Foundation, and proceeds from Sir Ian McKellen's 80th birthday tour which called into The Dukes in 2019.

Refubishment of the electric controllers and batteries began in January 2020 with the help of milk float specialist, Steve's Electrics, based in south Wales. However, when the Covid-19 pandemic struck, all work ceased.

In May, the electrics were eventually completed and repairs to the bodywork, access panels and technical controls could be done while still retaining the character and historic features of the vehicle which has become a familiar sight to park show audiences over the years.

Bernard's milk float can be seen throughout this year's show - Grimm Tales: Witches, Wolves, Fairies and Frogs - which runs on Tuesdays-Sundays until August 22 at 7.15pm.

Many performances are already sold out so tickets priced £20 must be booked in advance by visiting www.dukeslancaster.org or ringing The Dukes Box Office on 01524 598500.