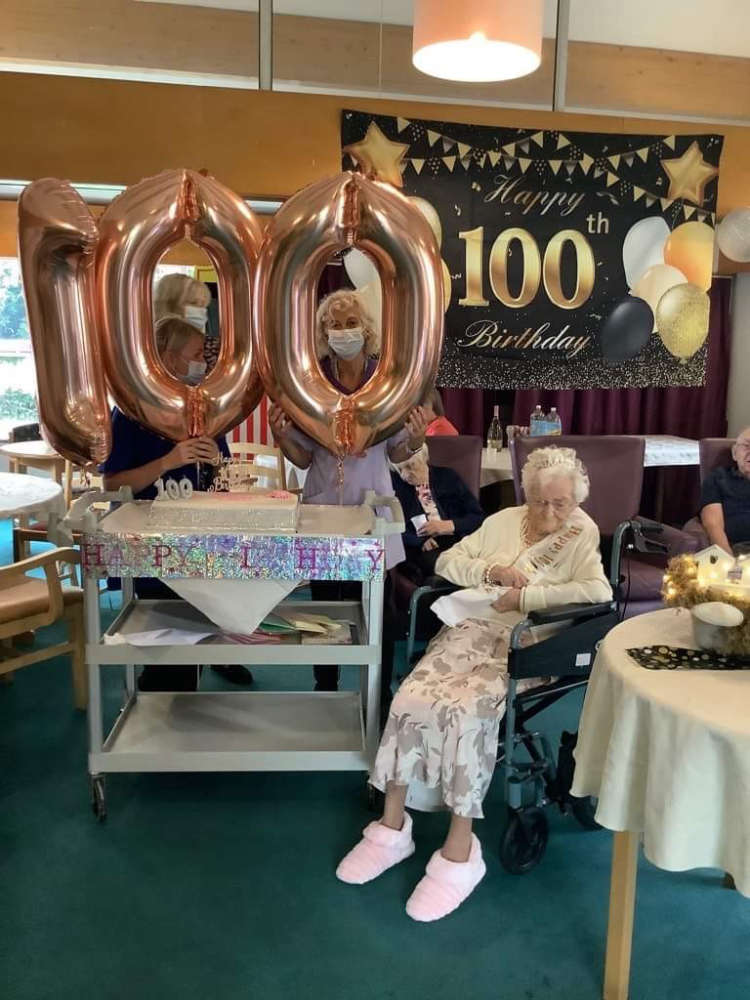 Staff at a Morecambe care home have been praised for going above and beyond after they organised a surprise 100th birthday party for a long-time resident.

Ethel Fawcett, who has lived in Woodhill House Home for Older People in Morecambe for 13 years, celebrated her big day with lots of food, songs and gin and tonics.

Staff at the home banded together to organise the birthday bash for the long-time resident, decorating Ethel's room to mark the occasion. Kind-hearted residents worked all week to make individual birthday cards for Ethel, but it was a card from Queen Elizabeth that put the icing on the cake.

Carmel Croft, Registered Manager at Woodhill House, said: "As this was the first resident's 100th birthday I've had the pleasure of organising, I spoke to my team and everyone was in agreement that we had to make Ethel's birthday a day to remember and full of surprises.
"Everyone contributed towards the day. Staff organised the decorations, and the room was dressed to impress. Staff came in to help who weren't on the rota. All the residents came along to surprise Ethel with songs, laughter and gifts, and spent a week making their own individual, unique birthday card. Ethel received one very special birthday card, which arrived on the day from her Majesty the Queen.

"We spoke with a local baker whom we know well, and he agreed to make a large birthday cake for our Woodhill family. The catering team organised a splendid buffet. Wine was flowing, while Ethel enjoyed her gin and tonics. Ethel and all her Woodhill family really enjoyed her special day."

Ethel's nephew, Michael Brown, praised staff at Woodhill House – where she has lived since 2008 – for their "exemplary" care of his auntie.

He said: "Frankly from my point of view I wouldn't have expected anything less. The staff there have been exemplary in looking after her.
They are very helpful, very supportive and very kind towards her, which is the important thing. I've got nothing but praise for the staff there."

Cllr Gooch said: "Care staff in Lancashire have consistently gone above and beyond for residents during the pandemic. It is heart-warming to see staff, who have gone through such adversity during the past 18 months, go to this much effort for one of their residents. Staff, and residents, made sure Ethel had an extra special day, while ensuring the celebrations were safe for all. Thank you to everyone at Woodhill House for going the extra mile for Ethel, and all the other vulnerable people who care for day in day out."