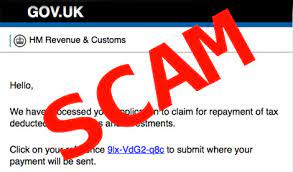 Tax credits customers should be vigilant and alert to potential scams, HM Revenue and Customs (HMRC) has warned, as the remaining annual renewal packs will arrive in the post this week.

In the same period, HMRC has worked with telecoms companies and Ofcom to remove more than 3,000 malicious telephone numbers and with internet service providers to take down over 15,700 malicious web pages. HMRC responded to 443,033 reports of phone scams in total, 135% up on the previous year.

Anyone doing their tax credits renewal who has received a tax or benefits scam email or text might be tricked into thinking it was from HMRC and share their personal details with the criminals or even transfer money for a bogus overpayment.

HMRC’s Cyber Security Operations identifies and closes down scams every day. The department has pioneered the use in government of technical controls to stop its helpline numbers being spoofed, so that fraudsters can no longer make it appear that they are calling from those HMRC numbers.

“We’re urging all of our customers to be really careful if they are contacted out of the blue by someone asking for money or bank details.

“There are a lot of scams out there where fraudsters are calling, texting or emailing customers claiming to be from HMRC. If you have any doubts, we suggest you don’t reply directly, and contact us yourself straight away. Search GOV.UK for our ‘scams checklist’ and to find out ‘how to report tax scams’.”

Many scams mimic government messages to appear authentic and reassuring. HMRC is a familiar brand, which criminals abuse to add credibility to their scams.

If customers cannot verify the identity of a caller, HMRC recommends that you do not speak to them. Customers can check GOV.UK for HMRC’s scams checklist to find out how to report tax scams and for information on how to recognise genuine HMRC contact.