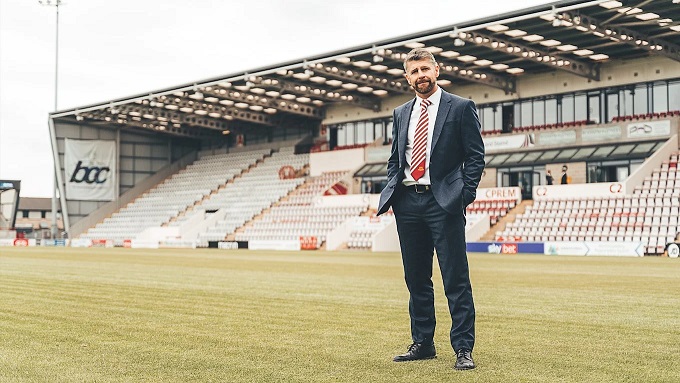 Morecambe FC is delighted to announce the appointment of Stephen Robinson as first team manager who joins the club on a three year deal after spending a successful three and a half years at Motherwell.

Robinson lead the Steelmen to two Cup finals in one season and a top three finish which also brought Europa League football to the club. He made 448 appearances during his playing career and had spells with the likes of Tottenham Hotspur, AFC Bournemouth, Preston North End and Luton Town before hanging up his boots in 2008. He also played seven times for the Northern Ireland national team.

He first joined Motherwell as their assistant manager six years ago under Ian Baraclough and also held the same role with the Northern Ireland national team alongside that.

After a spell as manager at Oldham Athletic he returned to Motherwell before taking over as boss.

Stephen said: "I am delighted to have agreed to become the manager of Morecambe FC and I am really looking forward to the challenge ahead.

"I have been very impressed with the club and everyone involved in the process. We are looking to build on last season's successful promotion campaign and look to firmly establish the club in league One.

"There is a lot of work in terms of recruitment in the coming weeks and getting us prepared for the club's first season in League One.''

Morecambe joint chairman, Rod Taylor said: "We are delighted that Stephen has agreed to join us for our first season in League One.

"We had a number of quality applicants but we were especially impressed by Stephen's dynamism, his plans for the club and his contacts and we believe he will take the club forward.

"He has an excellent reputation and we are looking forward to working with him as we plan for an historic season.''

Fellow Joint Chairman, Graham Howse, added: "We went on record that we wanted to move quickly on this appointment and we have every confidence in Stephen putting a strong squad together for life in League One.''

John McMahon will remain as the club's assistant manager with former Shrimps striker Diarmuid O'Carroll returning to the club as first team coach after working with Robinson successfully at Motherwell.