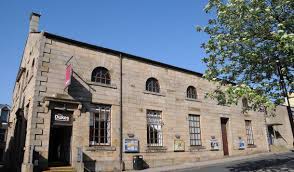 Local film-lovers can once again enjoy watching new releases on the big screen as The Dukes reopens its venue on Friday May 21 with a mouthwatering cinema line-up.

The reopening programme features some of the year’s biggest award-winning films, including Best Picture winner Nomadland, Minari, Judas and the Black Messiah, Sound of Metal and The Father, as well as the welcome return of the beloved monthly Mystery Film nights.

Tickets are currently on sale on The Dukes’ website and advance booking is required. Refreshments can also be ordered when purchasing a ticket, with the venue’s café-bar remaining closed for the time being.

The Dukes have a trio of screenings lined up for the first day back, beginning with British romance drama Ammonite. Directed by Francis Lee (God’s Own Country), Ammonite stars Kate Winslet and Saoirse Ronan as a paleontologist and gentlewoman who fall in love along the Lyme Regis coastline in the 19th century.

It is joined on opening day by Oscar-winners Minari and Nomadland. A Korean-American family are in search of the American Dream in Minari, whose star Yuh-Jung Youn won Best Supporting Actress, while Best Picture, Best Director and Best Actress winner Nomadland stars Frances McDormand as a woman who turns to living life on the road after the economic collapse of her hometown.

Reopening week also features screenings of Judas and the Black Messiah, starring an Oscar-winning Daniel Kaluuya as Fred Hampton, a charismatic civil rights leader of the Black Panthers who was made a person of interest by the FBI.

The opening week line up is completed with the chance for audiences to step into the unknown with The Dukes’ Mystery Film night, an evening where nobody knows what is being screened until the lights go down and the film starts to play. These evenings are for over-18s only, in case the film is rated as 18.

A busy May also welcomes screenings of beautiful Irish family animation Wolfwalkers, folklore romance Undine and Regina King’s One Night in Miami, a fictionalised account of a night out between Muhammad Ali, Malcolm X, Sam Cooke and Jim Brown.

In June, audiences can look forward to Riz Ahmed’s fantastic performance in Sound of Metal, the story of a heavy-metal drummer whose life is thrown into freefall when he starts to lose his hearing, and Anthony Hopkins’ Oscar-winning turn as a man living with dementia in tender drama The Father, co-starring alongside Olivia Colman.

Other titles currently on sale in the diverse programme include the magical delights of Disney animation Raya and the Last Dragon, surreal Greek drama Apples and Pedro Almodóvar’s short film The Human Voice, starring Tilda Swinton.

The Dukes Cinema Programmer, Johnathan Ilott said: “It has been a long and uncertain year for cinemas, so it feels fantastic to finally be at the stage of welcoming back audiences to The Dukes.

“We have a brilliant, vibrant programme of films coming, including the award-winning Nomadland and Judas and the Black Messiah and the return of our Mystery Film screenings, which we cannot wait to share with audiences in a safe environment.

“Our philosophy for the last 50 years has been to champion all kinds of cinema and show how important it is to our lives. We’re excited to get back into our venue and enjoy new film experiences with audiences again.”

Full details of The Dukes’ cinema reopening programme and tickets can be found at www.dukeslancaster.org. Tickets are priced £6.50 standard/£5.50 concessions, with the Mystery Film priced at £4.