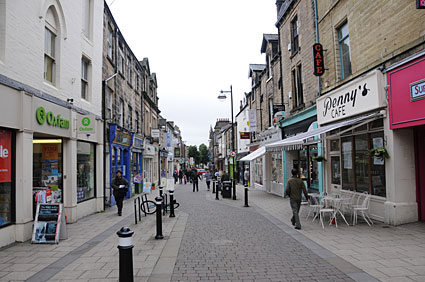 Businesses in Lancaster have voted yes to renewing the city centre’s Business Improvement District (BID). The successful ballot means that the Lancaster BID will remain in position until March 2026,

It is projected £1.38 million of levy payers’ money will be used to attract shoppers and visitors to the city centre over the next five years.

Councillor Tim Hamilton-Cox, cabinet member with responsibility for Sustainable Economic Prosperity, who also sits as the council’s nominee on the BID’s management committee, said: “It is fantastic news that Lancaster’s businesses have again voted ‘yes’ to the Business Improvement District.

“Since its creation the BID has delivered high quality events and festivals to draw people into Lancaster, made the centre’s streets safer and more attractive, and acted as a voice for the centre’s businesses.

“As we begin the recovery from the Covid-19 pandemic it will play a pivotal role in securing a successful and prosperous future for the district and the city council looks forward to working alongside BID members for a further five years.”

Business Improvement Districts are based on the principle of charging an additional levy on all business rate payers in a defined area, following a majority vote by those ratepayers.

Lancaster BID was established following a successful vote in 2012 and was renewed in 2015.

The BID operates on a levy paying system where business ratepayers who lie within the BID area and have a property with a rateable value of £10,000 or more, contribute a 1.5% levy. This money is then spent on projects and initiatives to increase footfall in the city.

It will now continue to work with the city’s business community to provide services over and above those already provided by the local authorities and set out in their new term delivery plan.

Nick Wilkinson, Chair of the Lancaster BID Management Board said “We are delighted with the strength of support shown by the result of this ballot. Businesses of all sizes have confirmed their confidence in Lancaster BID and delivered us a strong remit to push ahead with our ambitious plans for the next five years.”

Lancaster BID Manager, Tony Johnson, added “Lancaster BID has worked hard to support all city centre businesses through the challenges of the pandemic. The increased Yes Vote from five years ago really shows how much businesses value the support of Lancaster BID and gives us a strong remit moving forward.”

“With signs starting to look positive, we anticipate that restrictions will soon begin to be safely relaxed.  As businesses are finally able to reopen their doors, we believe that Lancaster BID will be more important than ever to help rebuild footfall and support the city centre to thrive once again.”