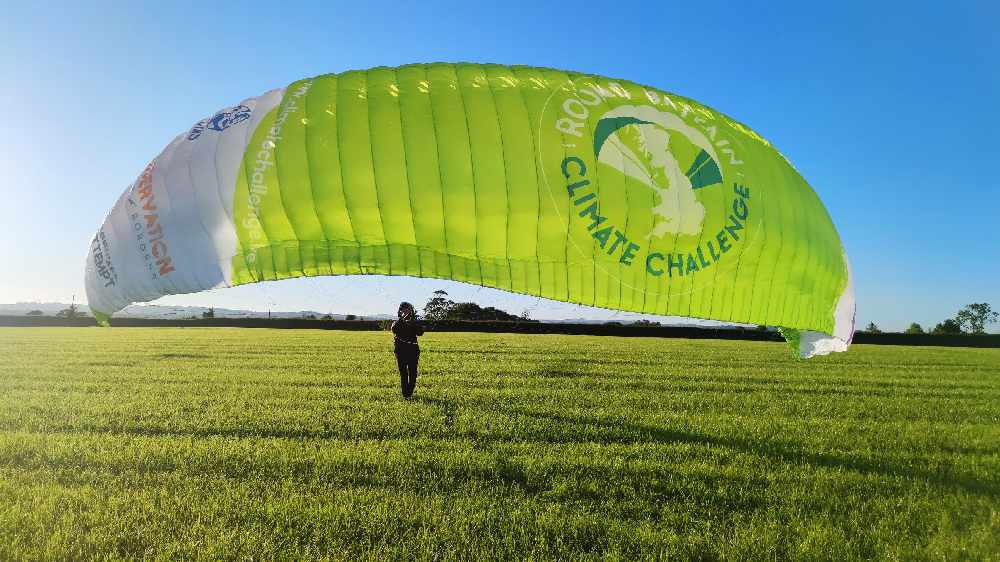 Sacha Dench, also known as the Human Swan, will be visiting the Eden Project North site in Morecambe on Wednesday as part of the Round Britain Climate Challenge, her daring paramotor flight to circumnavigate Great Britain

Morecambe will be one of the first stops on a daring round-Britain paramotor flight by “Human Swan” Sacha Dench, which is due to take in four Eden Project sites.

Sacha began the Round Britain Climate Challenge in Scotland on Saturday (June 26) and is due to touch down in Morecambe tomorrow (Wednesday June 30) with a plan to visit the proposed Eden Project North site at around 11.30am.

Her circumnavigation will take her around Britain’s coastline and she will land at the Eden Project in Cornwall and the sites for the proposed Eden Projects in Portland in Dorset and Dundee in Scotland during the trip.

The 3,000-mile expedition will travel anti-clockwise around the country, ending back in Glasgow about six weeks later. Sacha will travel by a wind and green electricity-powered paramotor.

The expedition is designed to inspire and excite the nation to get involved in tackling the climate crisis in the run up to the 26th United Nations Climate Change Conference (COP26) in Glasgow this November.

Sacha, famous for global expeditions with migratory species, turned her focus to climate change for this expedition after losing her family home in the Australian bushfires last year.

She will be landing frequently, talking with, filming, and gathering information from industry, innovators and entrepreneurs, local heroes, communities, schools, farmers and individuals – anybody involved in addressing the effects of climate change in their areas. A compilation of these stories will be presented at COP26.

Eden Project Co-Founder Sir Tim Smit said: “One of my heroes Muhammad Ali used to ‘float like a butterfly, sting like a bee’ as another of them, Sacha Dench, flies like a swan, stinging only with a tale of the challenges facing us.

“Tracing the entire coast of Britain in a pilgrimage to the natural world and our need to adapt and save it from the worst of climate change, landing to talk to people making a difference to a future that still remains ours to make.

“We find our country embarking on a course to a green enlightenment and Sacha wants to tell this story and expose the risks of not grasping the future.

“Eden and so many others stand behind her as a champion for our only planet home, hoping that her commitment will excite us into action to become citizens not consumers of the world.”

Sacha said: “I’m really looking forward to visiting Morecambe as the first Eden Project stop on my journey. Eden Project North is a hugely exciting idea and I know from Tim and my friends at Eden that the community in Morecambe is really rallying behind the plans.”

She added: “Along with testing the capability of electric flight, and challenging what we think is possible, I want to capture the imaginations of the young and old, rural and urban, and focus on answers to the climate crisis – not problems - and encourage everyone, to get involved.

“We’re trying to answer the question Britain drove the Industrial Revolution, can we drive the Green Revolution too?

“As well as investigating how climate change is affecting different regions of the country, we will be showing – in a visually stunning and exciting way - what is happening to help cut carbon and preserve and restore our environment. We’ll be finding the likely and unlikely heroes and discovering where and what works.”

She is aiming to set a World Record by calling on residents all around the country to take an impactful step on climate through inviting individuals everywhere to commit to take one (or more) of the 16 practical steps through count-us-in.org between June 18 and July 17.

To set the new World Record, 140,001 people must take a step, such as cutting down on food waste, or walking and cycling more. Count Us In is a global community of people and organisations taking practical steps to protect what they love from climate change before it is too late.

Count Us In’s mission over the next decade is to inspire 1 billion people to significantly reduce their carbon pollution and challenge leaders to act boldly to deliver global systems change. More on www.count-us-in.org.

For more information on the Round Britain Climate Challenge, see www.conservation-without-borders.org/round-britain.