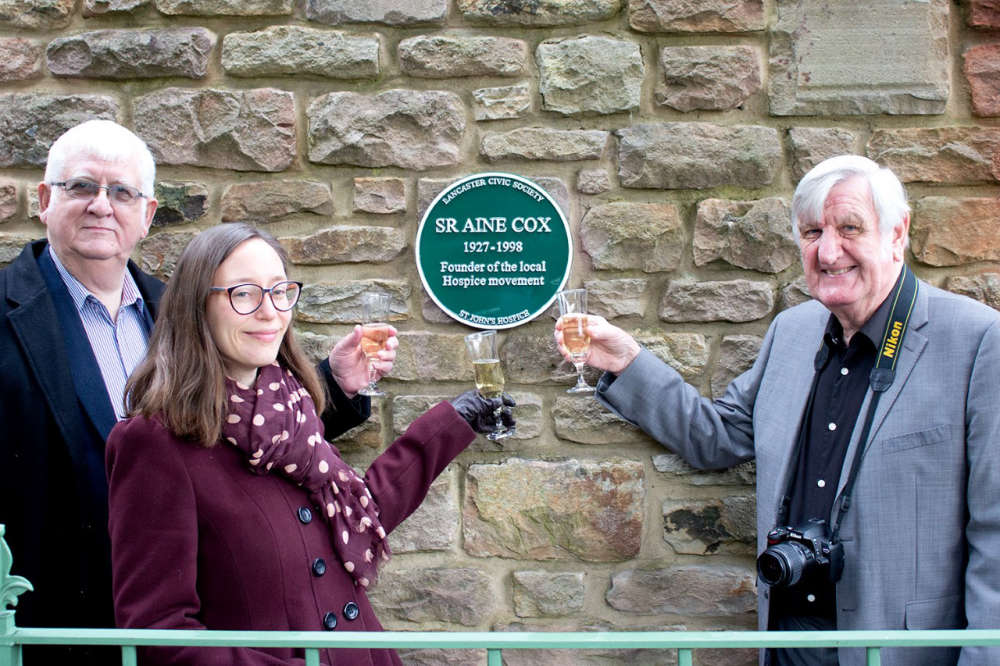 The founder of St John’s Hospice, Sister Aine Cox, has been celebrated with the unveiling of a new plaque outside the Hospice she worked so hard to create.

Lancaster Civil Society has worked with Rachael and the public to celebrate the women who have made significant contributions to the area, whether that be science, the arts, care or another field. More than 40 women have been nominated, and Sister Aine’s plaque is the first of many to be unveiled.

When St John’s Hospice admitted its first patients in December 1985, the Hospice movement in the UK was less than 20 years old. Sister Aine’s determination and pioneering spirit has now helped thousands of people in this area during one of the most difficult times anyone can face.

Sue McGraw, chief executive said, “We are absolutely delighted to have this plaque to commemorate the dedication and care of Sister Aine Cox. We are so proud of her heritage here at St John’s Hospice, and many staff, volunteers and supporters still have fond memories of her. I’m thrilled to be part of this initiative to recognise the work of local women as well, and look forward to learning more about the wonderful things women have contributed to this area!”

In attendance for the plaque unveiling were Sue McGraw, St John’s Hospice’s CEO, Chris Heginbotham, the Chair of Trustees, Pam Barker, Patron of St John’s, and Maddy Bass, Director of Nursing. Also attending were three nurses; Jules Bukowski, Maxine Armistead and Polly Haley, who have all worked at St John’s for over 35 years, and two volunteers, Janie Kirkman and Jean Lawrence. John Regan and David Morgan from Lancaster Civic Society, and Rachel Bowers from Lancaster City Museums also attended to see their first plaque of this initiative.