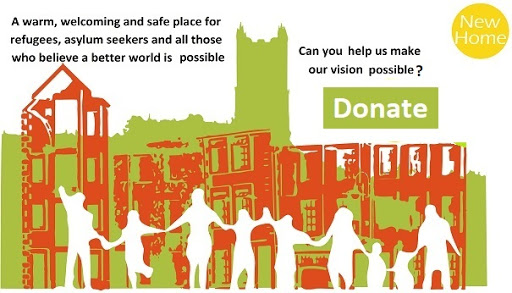 Musicians from Lancaster and Syria will perform a Zoom concert on Saturday 2nd January, organised by Halton Mill and Global Link, to raise money for a centre for Refugees and Asylum Seekers in Lancaster.

The Lancaster musicians first met Raghad at a Zoom concert planning meeting hosted by Fiona Frank from Halton Mill. They found lots of musical links, and as well as playing individually they decided to work on a couple of musical collaborations. It’s difficult to do this when people are in different places, but thanks to Ben Farmer’s sound engineering skills and the miracle of Zoom, we’ll be able to hear the results during the concert!

The organisers aim to raise money to support the purchase and upkeep of the much-needed, new Global Link Refugee Centre in Lancaster for refugees and asylum seekers, helping to give an important part of our community a new beginning in 2021.

This event also supports live music and some of the musicians who make up Lancaster's flourishing music scene. Half the cost of the tickets will go to the musicians, and half the ticket income and the full amount of additional donations will go to Global Link.

Lancaster duo Sian Phillips and Paul Sherwood will take us on a musical journey from the north of England to France, northern Spain and the Balkans; Jane Lawrence will play

Klezmer music from her Ashkenazi Jewish heritage, along with some of her favourite French, Swedish and English tunes; and Ben Farmer will be playing some of his own compositions based on his family heritage, which takes him from the north west of England around Scotland, Ireland and Wales, and even to colonial South Africa.

Raghad Haddad (viola) will play Syrian classical and traditional music. Raghad studied viola at the Higher Institute of Music in Damascus. She has played with the Syrian National Symphony Orchestra, the Orchestra of Syrian Musicians, and the Symphonic Orchestra of the Opera House in Damascus. One of the highlights of her career was being part of the West-Eastern Divan Orchestra conducted by Daniel Barenboim. She has now built a life for herself in the UK; based in Birmingham, she works as a performer, teacher and translator.

Playing with the London Syrian Ensemble, a group of Syrian professional musicians, performing traditional and classical oriental music, connects her to her homeland. As well as playing her beautiful music, Raghad will tell us a little about the journey she has taken to make a new life here in the UK. Raghad will also be running a workshop, an Introduction to Arabic Music before the show.

Standard tickets are £10, supporters' tickets £25, reduced price tickets £2.50 for low waged and students, and there are free places for refugees and asylum seekers and others with limited resources. There's also a chance to donate an additional amount towards the purchase and upkeep of the new Refugee Centre. To book tickets and donate, go to www.tinyurl.com/lancasterconcert

MUSIC WORKSHOP - INTRODUCTION TO ARABIC MUSIC: SAT 2 JAN, 5pm to 6pm. Raghad Haddad will also be running a music workshop on the day of the concert - an Introduction to Arabic Music, for musicians of all instruments and all standards, and open to all - bring your instrument and play along, or just come and listen. Like the concert this workshop will be free for refugees and asylum seekers, and costs £10 (standard ticket), £2.50 (concessions). You can book and pay for the workshop at the same time as booking your concert ticket.