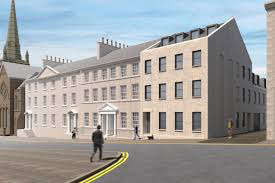 During recent years members of the Civic Society (now known as Lancaster City Vision) have become increasingly concerned about the number of applications for student accommodation in large purpose-built blocks, which have been granted planning permission by the City Council.

While fully accepting the significant importance of Lancaster’s two universities and their students to the local economy, Lancaster City Vision believe that the city is in danger of becoming overwhelmed by this form of development, to such an extent that its character and ambience is being fundamentally altered and that Lancaster's attraction as a tourist destination and as a pleasant place to live is being put in jeopardy by the sheer volume of space which is being currently devoted to an extension of the university campus.

There is also concern that the city will soon be facing a glut of such accommodation, much of which could not then be used for other purposes. While the University of Lancaster aspires to grow its numbers, the current uncertainties about the impact of leaving the EU, the increasing trend for countries such as China to grow their own institutions, and the current problems of finance for UK students, makes reliance on growth highly uncertain

"We are aware of the benefits to local retailers if they are able to rent out their upper floors to students living over the shops, thus making their businesses more viable and reducing the likelihood of dereliction, and we support those applications.

However, we have suggested to City Council members several times that consideration should be given to converting such premises to two-bedroom flats that couples can rent thus populating our centre - as has been done successfully by other cities around the country Birmingham notably – when shops, cafés, restaurants, and entertainment facilities will be utilised by them with the city centre being peopled at all times. Our city centre would then have a vibrant population who cared about their area, much reducing the current problem of anti-social behaviour now prevalent there at night-time."

Lancaster City Vision also said that they are aware of the argument that the provision of new purpose-built accommodation will entice students out of the small, terraced houses in the city, thereby freeing up lower-valued property for first-time buyers. However, whilst the group would welcome this shift, they should like to see evidence that it is actually happening.

Speaking about the planning process, the group said,

"We accept that, in the main, it is property developers who are the driving force in financing these buildings and that the City Council Planning Department has limited powers to refuse permission. We are also aware that planners are constrained by the knowledge that determined, well-financed developers can and will appeal against refusals, confident that the Council cannot afford to enter into expensive litigation.

However, we would argue that it should be possible (under the relevant policy DM7 to exercise greater control over plans, where criteria are open to subjective assessment e.g.(ii) "proposals should be appropriate to the character of the local area in terms of design, layout and materials used;" (iv) "there should be no unacceptable impact......through increased noise and disturbance" (vii) proposals should "respect the character and permeability of the surrounding area".

Lancaster City Vision claim that the impact on transport and other services will be significant, with issues about congestion and student lifestyles becoming more prominent. The prospect of further large-scale developments - on Cable Street, Mary Street/Dalton Square, and the Oddfellows Hall (all of which have been granted planning permission) together with the Filter House on the A6 and Galgate Mill, and other possible moves in the Canal Quarter, all add to mounting concern.

The group has already observed a growing mood of opposition to further expansion to these developments at all levels in the city. This is articulated in the local press, and in the level of opposition to specific schemes

Lancaster City Vision are calling for a moratorium on further student accommodation blocks until the construction of the schemes already in the pipeline has been completed and their impact assessed.