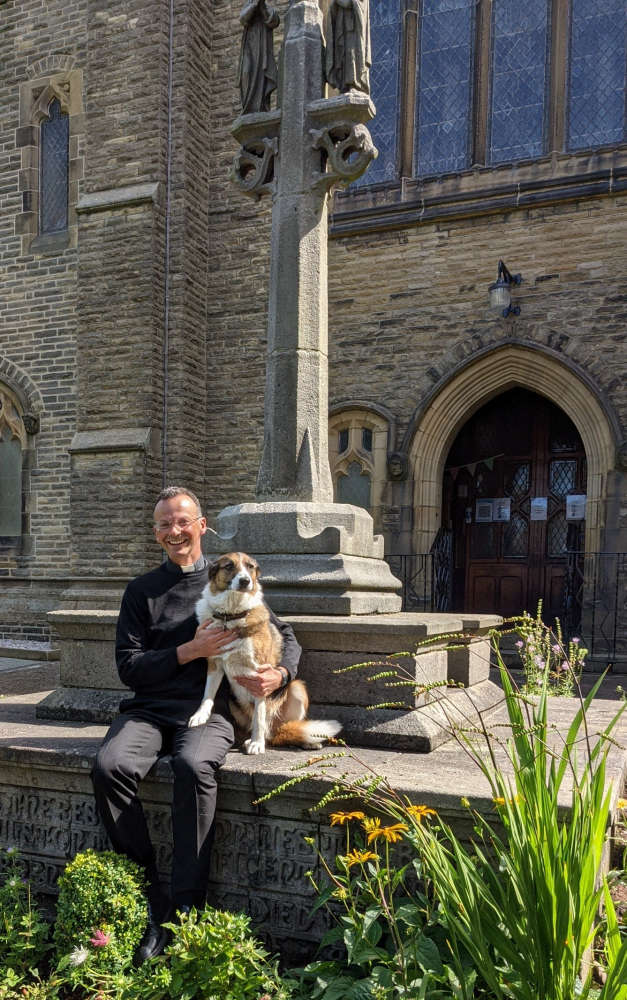 Fr Philip Conner and his dog, Bosco who are leaving St Joseph's this month after six years in the parish

The 125th anniversary of St Joseph’s RC Church in Lancaster will ring the changes this autumn. The church will mark its milestone with an Autumn Festival in September organised along with St Joseph’s RC Primary School founded in the same year.

This family event with music, food, activities and stalls will be open to all the community.

“After the year we’ve all had, we want to celebrate something positive and spread some joy by bringing the community together again,” said parish priest, Fr Philip Conner.

2021 is also the Year of St Joseph, marking the 150th anniversary of St Joseph being declared the patron of the universal church.

To celebrate, St Joseph’s is organising events for families, the school, and the travelling community, linking with Caritas to support adoption and fostering in the area, and developing its relationship with St John’s Hospice. St Joseph’s will also be open to the wider public on September 11 for Heritage Open Days when guides will talk about the church’s history and there’s a chance to visit the church volunteer-run allotment from 2-3.30pm.

Sadly, Fr Philip leaves St Joseph’s at the end of August after six years as parish priest. His successor will be Fr John Paul Evans, currently priest at Lancaster Cathedral.

“With my dog, Bosco, I’ve walked around the community every day so I’ll miss meeting people along the way, popping into the school and getting to know new people in the parish.”

One of his final walks took place on a soggy August day to mark the Feast of the Lancaster Martyrs.

He joined parishioners on The Martyrs Walk, starting at the Martyrs Shrine at St Joseph’s and visiting the Martyrs Monument at Highfield. This walk is included in a new booklet Fr Philip has edited - Like A Deer Yearning for Running Streams – which also features prayers from the martyrs era. During his time at St Joseph’s Fr Philip has overseen much activity, not least the restoration of the Grade II listed church in 2019, thanks to a Heritage Lottery Fund grant.

The land on which St Joseph’s stands was donated in 1896 by Margaret Coulston whose family were wealthy leather traders. She is buried outside the entrance. St Joseph’s is one of the last churches built by the Pugin family who were responsible for the neo-Gothic architectural revival and, as such, attracts visitors from far afield.

Community fundraising helped to support the restoration and has continued this year to enable the 750kg church bell to be restored this summer. After years of not sounding, the bell will ring out again as a finale of the anniversary celebrations. Developing links within the Skerton community has been at the heart of St Joseph’s work in recent times with support for the local food club and the development of Little Joe’s clothing bank. St Joseph’s is also the base for Skerton Community Network which aims to link all the various groups and organisations in the area to tackle issues which it faces. The first step last year was a Christmas project and since then a community has developed on Facebook and the Network hopes to work with the council to improve the Skerton Triangle area.

Said Fr Philip: “Our anniversary celebrations are not just about the revival of our building but also the revival of the community. A sense of hope is what people have needed for so long.”

For updates on the Autumn Festival, visit: https://stjosephs-lancaster.co.uk/