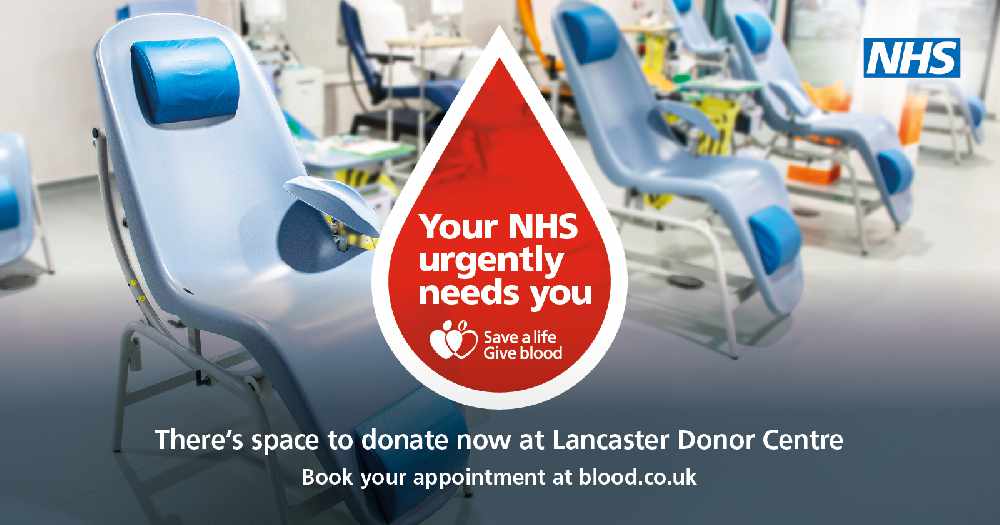 People in Lancaster are urged to join a growing club of new donors stepping forward to help the NHS recover this winter, as it’s revealed 2721 fewer donors in Lancaster gave blood during the height of the pandemic.

Around 4,400 dedicated donors regularly donated at Lancaster Donor Centre last year, compared with over 7100* the year before. This mirrored the national picture in England which saw hospitals kept in good supply with blood during the pandemic by the smallest pool of donors in the 21st century.

Until recently the NHS intentionally relied on existing donors to fill the majority of appointments throughout the pandemic because they are far more likely to make a successful donation – a vital measure to make every donation count while social distancing reduced available chair space. This meant fewer appointments were available for new donors. Alongside the natural lifecycle of blood donors retiring every day, this led to the community of active donors across the country shrinking last year to its lowest level since 1996.

Now, as life returns to normal and with fewer people donating regularly, the NHS needs new blood donors to play a crucial role in its recovery. An unprecedented 100,000 new donors are needed nationally to register and donate blood by spring to achieve the largest ever annual recruitment drive and join the amazing 67,000 new donors who have already joined the club this year.

Around three quarters of a million people donated blood in England during the height of the pandemic – almost 40,000 fewer regular donors than the year before. This was the smallest pool of donors in the 21st century.

A new campaign (This Is Amazing - NHS Blood Donation) launched by the NHS today will run for six weeks and include TV adverts and support from businesses and influencers to celebrate blood donors and their lifesaving role during the pandemic, urging others to join the club of dedicated and amazing donors.

There is a particular need to recruit more Black donors to help treat patients with sickle cell disorder, which is the fastest growing genetic blood condition in the UK and mostly affects Black people where ethnically matched blood is critical for treatment. Also needed are new donors with O negative blood, which is the universal type and is often used for medical emergencies – 45% of new donors are likely to have O positive or O negative blood.

Andrew Leeming, aged 51 from Cleveleys in Lancashire, is a regular blood donor at Lancaster donor centre. When his mum became very ill with cancer, blood and platelet transfusions were a regular part of her treatment. Andrew said:

“It was this that reminded me of the simple gift of giving blood. Mum had donated blood over fifty times, so I wanted to do the same and give something back. An hour of your time is nothing compared to the impact that each donation means to the patient. You never know when you – or someone you know, love, and cherish – may be on the receiving end. My mum didn’t give to receive and neither do I, but I now encourage anyone who will listen to donate, as long as they are fit, healthy and able to.”

Andrew aims to reach the 100-donation milestone one day, and his favourite post-donation snack is a bag of ready salted crisps. He added: “I love donating – I've never had a bad experience and all the staff are so caring, careful, and smiley.

Asked what he would say to someone considering becoming a blood donor, Andrew said:

“Why wouldn’t you?! If you are fit and healthy it’s a simple thing to do, and most amazingly it literally saves lives. If that’s not enough, why not just see it as an insurance policy in case you become ill and need some lifesaving red juice!”

These new donors will fill the gaps left by those who retired from giving blood during the pandemic – which can be due to a number of reasons including health, change of lifestyle or simply not wanting to continue to donate – to help meet a return to normal demand for blood and will future proof the overall size and blood-type mix of donors to sustain services.

Demand for blood dropped by 27 percent at the start of the pandemic as hospitals reduced elective care. As a result, collections were adjusted and reduced by 21 percent. This ensured that blood stocks remain above the six-day target throughout.  Demand for blood is now back at pre-pandemic levels and may increase in the coming months as hospitals continue to catch up on delayed activity.

Helen Duggan, Assistant Director of Donor Campaigns at NHS Blood and Transplant, said: “Maintaining a safe and regular supply of blood to hospitals is our top priority. Through the most critical time of the pandemic this was achieved thanks to a loyal club of existing donors – the smallest of the 21st century.

“As hospitals catch up on routine care, we are facing a critical crossroads to meet the rise in demand for blood and are appealing for new donors in Lancaster to step forward and join this amazing group of lifesaving people.”

Blood is needed to help the NHS treat patients with cancer, blood disorders and those suffering medical trauma or undergoing surgery, and O negative blood is mostly used for emergency care. Each donation can save or improve up to three lives. In recent years there’s been a particular need for more Black donors, who are more likely to have the RO sub-type blood needed to help treat people with sickle cell.

Become a blood donor. Register today and book and appointment by visiting www.blood.co.uk, downloading the GiveBloodNHS app or calling 0300 123 23 23.