Art and Music in Harmony at Lancaster Exhibition 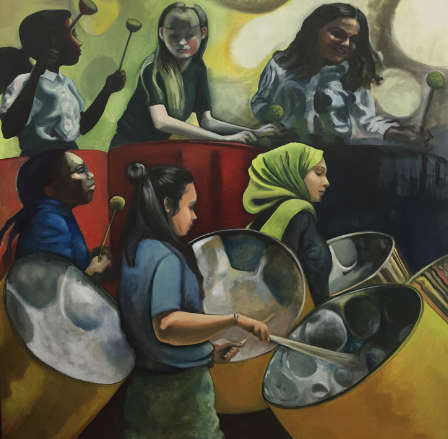 Artists inspired by music and musicians who are also skilled artists will show their work in Lancaster this October. The Art of Music is the second time that King Street Arts have presented an exhibition coinciding with Lancaster Music Festival. The exhibition opens on October 13, the day before the Festival, and runs until October 25.

“No single art form stands alone and we’ve always wanted to open a dialogue between the different creative arts,” said Roy Smith who set up King Street Arts with Kath McDonald in 2017.

Almost 50 local, national and international artists will be displaying work ranging from paintings, drawings and sculpture to photography, video, mixed media and printmaking at King Street Studios, the Storey Building and Atticus Bookshop.

And while visitors view the artworks, they can enjoy some music too as, occasionally, musicians will be performing in the galleries.

These include visual artist Edward Foster who presents a Renaissance Lute concert on October 16 at 7.30pm, and Celtic harpist, Celia Briar who plays at a music and drawing event on October 17 from 3-3.45pm both at King Street Arts. Spaces are limited at these events so must be booked in advance by emailing: info@kingstreetstudios.art

Budding artists also have the opportunity to hone their skills at free workshops on October 16 led by Kath.

Draw To The Beat will use the power of music to inspire participants at the Storey Building during two sessions from 2-2.45pm and 3.15-4pm. Materials are provided but places are limited so please book by emailing: info@kingstreetstudios.art

Together with members of Lancaster Music Festival’s board, Roy and Kath had the difficult task of selecting work for the exhibition which has come from professional and semi-professional artists.

The chosen work has been produced either by visual artists inspired or influenced by music or by musicians who are also visual artists.

Among them is Lancaster’s own James Mackie, a visual artist, who, as a musician, played with The Selecter and Madness during the Eighties, and Manchester-based Rachael Addis, a featured artist in the BBC documentary on the 2020 Royal Academy Summer Exhibition.

All work is for sale and visitors can vote for their favourite exhibit for the artists to have the chance of winning a cash prize.