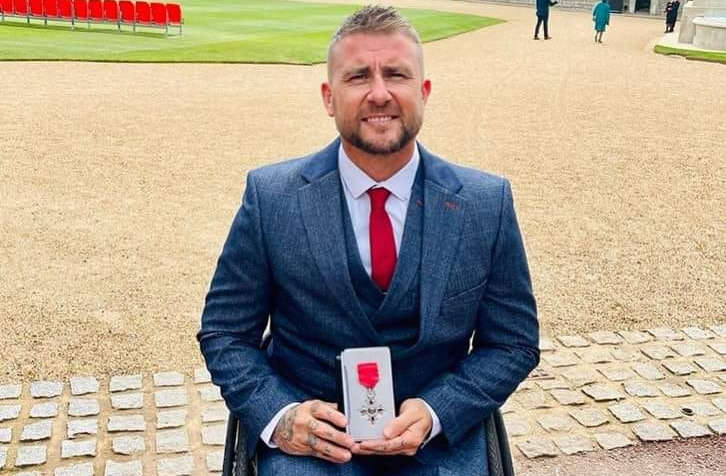 Stuart Robinson with his MBE. Photo from the RAF Regiment Facebook page.

Morecambe's Paralympic gold medal-winning wheelchair rugby player has been awarded with an MBE.

Stuart Robinson MBE, who was part of the winning Great Britain team at the Tokyo Paralympics in 2021, received his award earlier this week at Windsor Castle.

RAF veteran Stuart and the team won gold by defeating the USA 54-49 in the final, with Stuart scoring 14 tries.

He was awarded the MBE in the Queen's New Year's Honours List earlier this year.

The 40-year-old former RAF Regiment Gunner lost both his legs while serving in Afghanistan when he was injured by an improvised explosive device.

He was introduced to wheelchair rugby in 2014 during rehabilitation and invited to try out for the Invictus Games being held in London where he came away with the gold medal.

Following this, Stuart became part of the Great Britain Wheelchair Rugby talent development squad and was then selected to join the ParalympicsGB inspiration programme for the Rio 2016 Games.

Stuart then went on to captain the UK team for the Invictus Games in Orlando (2016) and Toronto (2017) where he won a further bronze and silver medal.

He was then invited to GB Elite squad training in November 2016 and became part of the squad who were successful at retaining their European Championship title in 2017 and 2019.