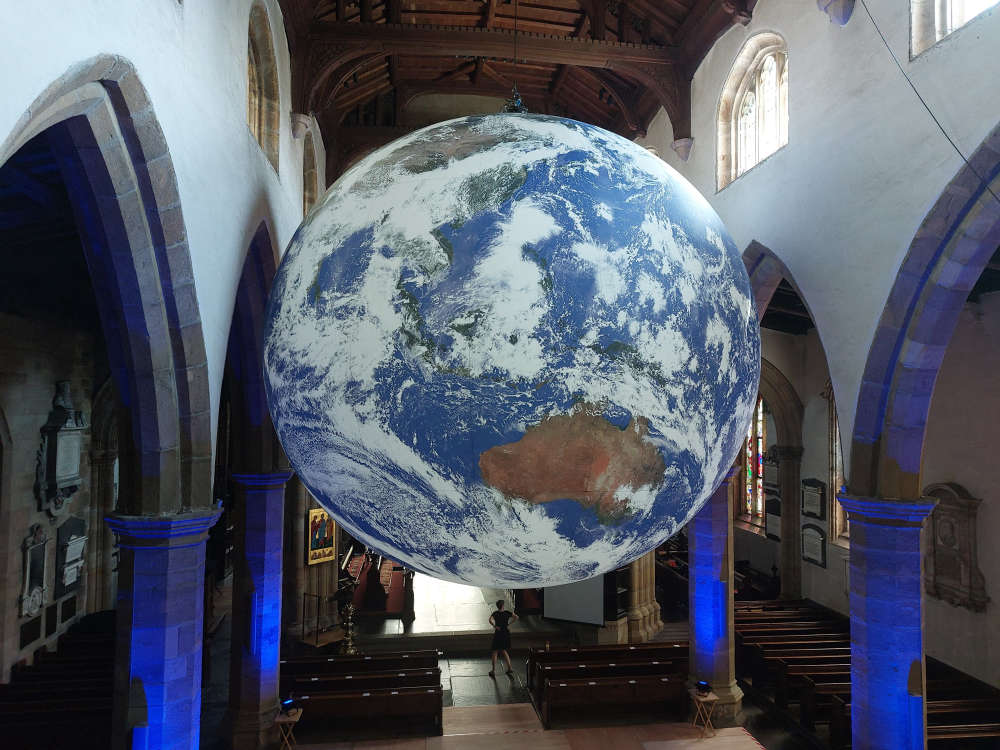 The vicar of Lancaster Priory says she hopes 100,000 visitors will come to see the magnificent revolving Earth artwork which goes on display in the church this Friday (June 24).

Reverend Leah Vasey-Saunders was speaking to Beyond Radio ahead of the public opening of 'Gaia' - a spectacular and thought-provoking replica of our planet featuring detailed NASA imagery.

LISTEN to Reverend Vasey-Saunders and Steph Edwards, events manager at the Priory, talking about Gaia

Measuring seven metres in diameter and backed by an atmospheric soundtrack of music, noises and voices, Gaia will be on display in the Priory next to Lancaster Castle until July 17.

Gaia is the work of renowned artist Luke Jerram, whose 'Museum of the Moon' installation came to the Priory in 2019.

"I think if we were to simply triple the numbers that came last time, because we've got this for so much longer than we had the Museum of the Moon, we'd be looking at about 100,000 visitors, or just under that," said Reverend Vasey-Saunders.

"So we'll see what happens.

"It's such a wonderful opportunity to come and see this in such a beautiful setting, so we really hope that we'll smash 100,000."

"(People who visit) will see the Earth in front of them, very slowly spinning around, to awe and wonder at in our beautiful building.

"We're really excited about it. People of all walks of life and backgrounds can come in to spend some time and reflect on the planet that we live on."

Rev Leah Vasey-Saunders is pictured below with Steph Edwards, events manager at the Priory 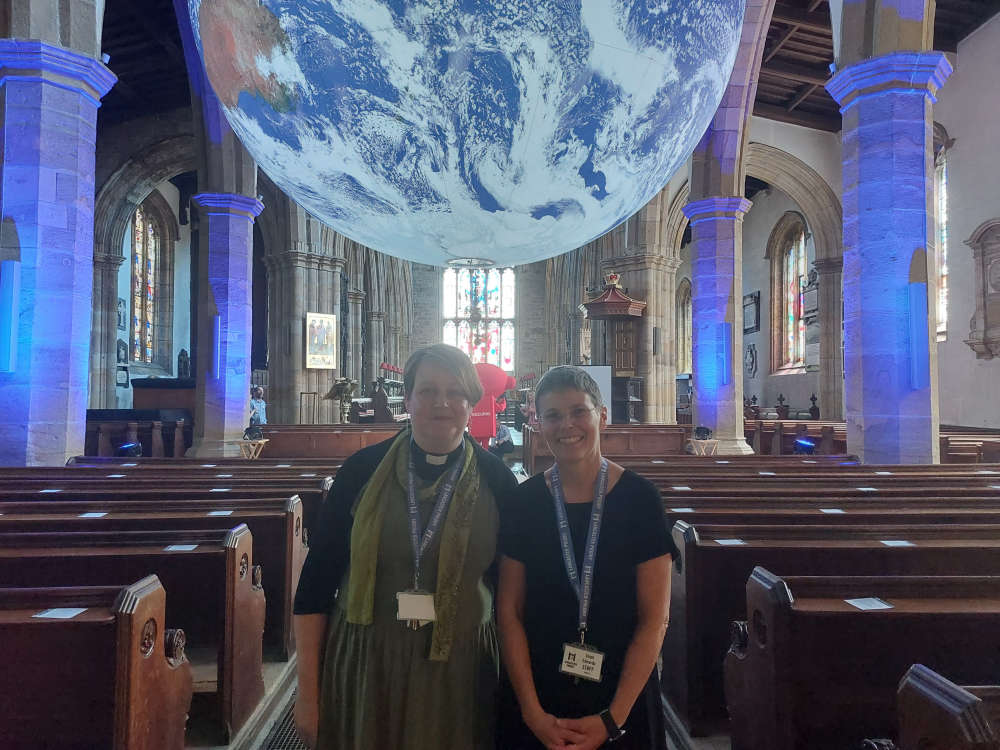 Luke Jerram's artwork is 1.8 million times smaller than the real earth with each centimetre of the internally lit sculpture describing 18km of the earth’s surface. By standing 211m away from Gaia, visitors can see the earth as it appears from the moon.

On Thursday, Luke spoke to Beyond Radio directly from Munich, Germany, where he is currently working on an installation of his Moon artwork.

LISTEN to Luke Jerram talking about Gaia coming to Lancaster:

Invited guests visited the Priory on Thursday for an early peek at Gaia.

Among them were Councillor Caroline Jackson, leader of Lancaster City Council and Cat Smith, MP for Lancaster.

Ms Smith said: "This is something that's really accessible, you can see this and then go to the Castle, then experience the cafes and delights of our city centre. I'd encourage visitors from far and wide to come and see this."

Councillor Jackson said: "It makes me feel very overawed and to understand the preciousness of the Earth. It's deeply awe-inspiring and quite a tearful experience just to stand there with it." 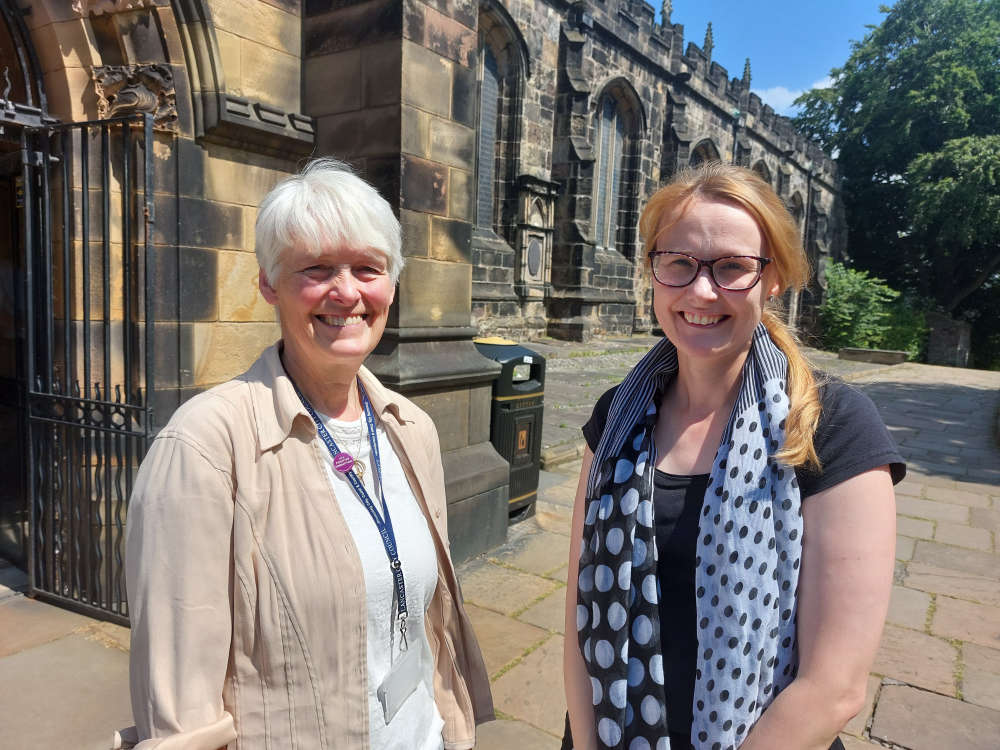 A 'Festival of the Earth' will also be held in and around the Priory with events taking place to complement the visit of Gaia.

The first Friday night event at 7.30pm on June 24 is a pub quiz with quizmaster, Kriss Foster, and this Saturday, from 11.15am, stalls and stands from local groups signposting to events within the community will be outside the church while inside, at 7.30pm, Priory organist, Ian Pattinson, will perform an Odyssey Into Space.

Musical performances, lectures, yoga, tai chi and Qigong sessions are just some of the other events taking place under the Earth sculpture during its stay and among the highlights will be the Blue Moon Band (July 1); a Night at the Opera (July 8) and the King’s Men choral scholars from King’s College, Cambridge (July 16).

These events are supported by Lancaster BID, Oglethorpe, Sturton and Gillibrand, Mazuma, ICT Reverse and the Duchy of Lancaster Benevolent Fund.

While Gaia provides an earth view on a macro scale, Four Rivers invites audiences to take a micro view of the world through intimate detail of the sands and tides as they shift in and out of the Bay.

Aous Hamoud (pictured below) spoke to Beyond Radio about creating 'Four Rivers'. 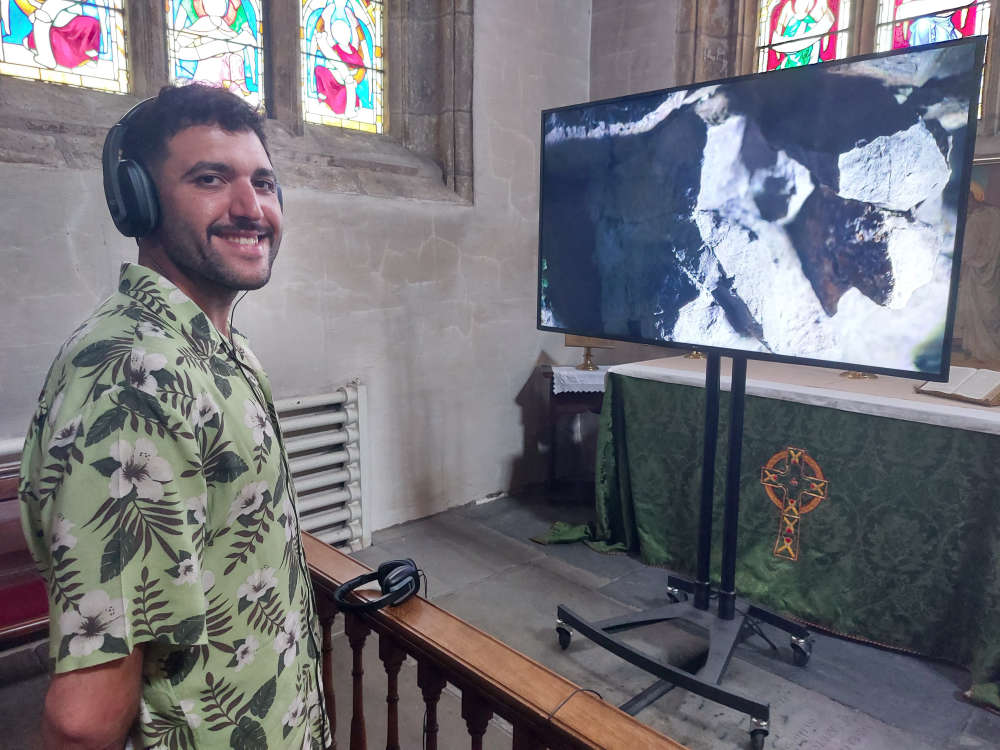 LISTEN to our interview with Aous Hamoud:

Visitors wishing for some quiet contemplation during the festival can use the Regimental Chapel which is set aside for prayer and spiritual activities.

Lancaster Priory is open for Gaia viewings from 10am-5pm every day and admission is £3.

Hourly time slots can be booked in advance to guarantee entry.

Anyone wishing to pay on the door might have to queue.

Up to 200 people can be inside at any one time and it is essential that groups of 12 or more contact steph@lancasterpriory.org to book in advance.

Tickets for evening events range from £5-£16. For more information and to book, visit: lancasterpriory.org 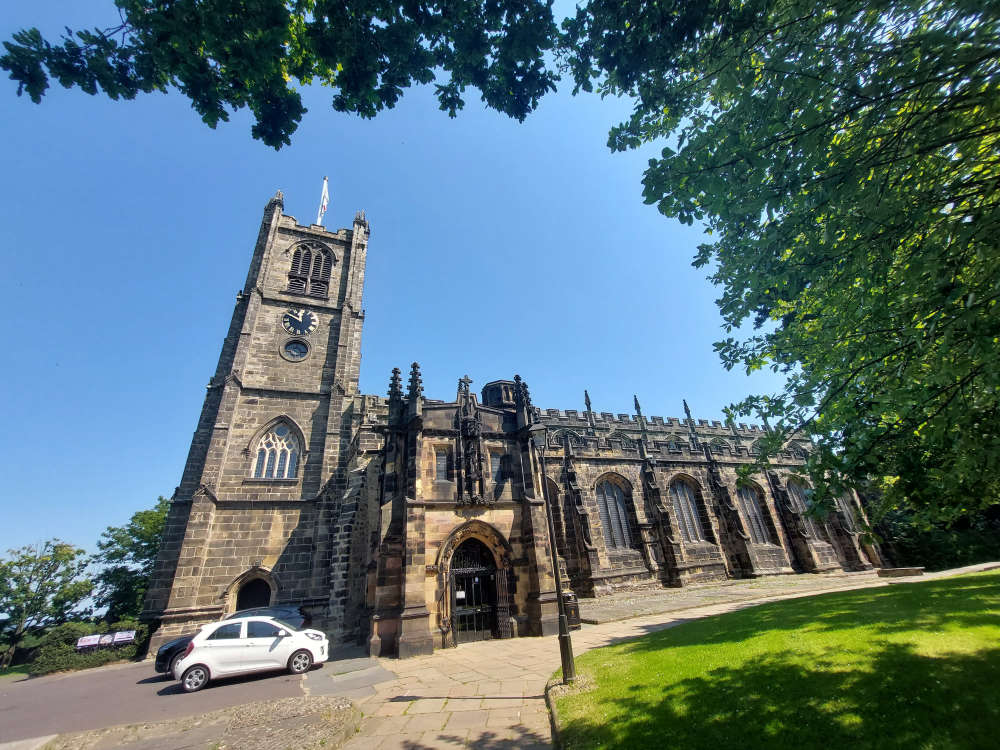